In the previous blog post, we’ve discussed the philosophy of outliers part 1 and outlier detection univariate methods part 2. In this 3rd post, we are going to discuss more technical details of the outlier detection in regression.

A observation that is substantially different from all other ones can make a large difference in the results of regression analysis.

Outliers play important role in regression. More importantly, separated points can have a strong influence on statistical models-deleting outliers from a regression model can sometimes give completely different results.

Let’s see the example below. This example uses the dataset-cars.

Despite all this, as much as you’d like to, it is NOT acceptable to drop an observation just because it is an outlier. They can be legitimate observations and are sometimes the most interesting ones. Like what I stated in the previous posts, it’s important to investigate the nature of the outlier before deciding. Once the outliers or unusual observations are detected, the best way to start is to ask whether the outliers even make sense, especially given the other variables you’ve collected.

It is common practice to distinguish between two types of outliers. Outliers in the response variable (DV) represent model failure. Such observations are called outliers. A regression outlier is an observation that has an unusual value of the dependent variable \(Y\), conditional on its value of the independent variable \(X\). A regression outlier will have a large residual but not necessarily affect the regression slope coefficient.

See the Figure (a) below. This is an example of an outliers without influence.

Figure 2: Figure (a): Outlier without influence

Although its Y value is unusual given its X value, it has little influence on the regression line because it is in the middle of the X-range.

It is possible to have a high leverage and yet follow straight in line with the pattern of the rest of the data. High leverage observations can affect the regression model, too. Their response variables need not be outliers.

See the Figure (b) below. This is an example of high leverage observation.

because it has a high value of X. However, because its value of Y puts it in line with the general pattern of the data it has no influence.

High leverage points that actually influence the slope of the regression line are called influential points. Only when an observation has high leverage and is an outlier in terms of Y-value will it strongly influence the regression line. In other words, it must have an unusual \(X-\)value with an unusual \(Y-\)value given its \(X-\)value. In such cases both the intercept and slope are affected, as the line chases the observation.

\[Influence = Leverage \times Discrepancy\] See the Figure (c) below. This is an example of a combination of discrepancy (unusual Y value) and high leverage (unusual X value) observation.

This observation results in strong influence. When this case is deleted both the slope and intercept change dramatically..

In summary, outliers in regression are:

In regression it helps to make a distinction between two types of leverage points: good and bad.

Leverage points do not necessarily correspond to outliers.

Observations whose inclusion or exclusion result in substantial changes in the fitted model (coefficients, fitted values) are said to be influential.

Many numerical and graphic diagnostics for detecting outliers and influential cases on the fit have been suggested.

In the simple regression model, one can make a plot of the \((x_{i},y_{i})\), which is called a scatterplot, in order to visualize the data structure. Many people will argue that regression outliers can be discovered by looking at the least squares residuals. Unfortunately, this is not true when the outliers are leverage points. If one would apply a rule like “delete the points with largest LS residuals”, then the “good” points would have to be deleted first. Often, influential points remain hidden, because they do not always show up in the usual LS residual plot.

A scatter plot with Confidence Ellipse

Departure from linearity in the suggests the simple linear regression model is not adequate. Points in the residual plot should scatter about the line \(r=0\) with the pattern. If curvature is present or if the distribution of the residuals depends on the value of x, then the simple linear model is not adequate. Usually, a confidence ellipse is drawn around the point cluster center coordinates. The rule of thumb is \(0.95\). Points outside of, say, 95% confidence ellipse is labeled as outlier or unusual observations.

Observations that stray outside of the 95% confidence envelope are statistically significant outliers.

For illustration, R sample data (state.x77) is used in the plot example. This data set give us information such as population size, average income, illiteracy rate, temperature, and murder rate for 50 states in USA.

The qqPlot function from {car} is used to detect outliers. It draws theoretical quantile-comparison plots for variables and for studentized residuals from a linear model. A comparison line is drawn on the plot either through the quartiles of the two distributions, or by robust regression.

Subsets of cases can jointly influence a regression line, or can offset each other’s influence. Cook’s D can help us determine joint influence if there are relatively few influential cases.

However, Cook’s D may not be impractical if there are potentially a large number of subsets to explore. Thus, Added-variable plots (also called partial regression plots) provide a more useful method of assessing joint influence.

In applied statistics, a partial regression plot aka Added-variable plots attempts to show the effect of adding another variable to a model that already has one or more independent variables.

Added-variable plot can be easily created using the avPlots() function from {car} package.

We see here that cases-Nevata and Alaska have unusually high Y values given their X’s. Because they are on the extreme of the X-range as well, they are most likely influencing all slopes.

Diagnostics are certain quantities computed from the data with the purpose of pinpointing influential points, after which these outliers can be removed or corrected. When there are only one a single outlier, some of these methods work quite well by looking at the effect of deleting one point at a time.

Multiple outliers do not necessarily have large \(MD_{i}\) values because of the masking effect.

Some researchers believe Hat-values exceeding about twice the average hat-value should be considered noteworthy.

Hat-value can be easily calculated using the hatvalues() function from {stats} package.

The graph above indicates that Alaska and California have the highest ratio. It means these two states are quite unusual if we compared their predictor values compared to other states. Here is why:

Both of these states are indeed quite particular compared to the other 48 states. One thing to remember that not all high-leverage observations are influential observations. It will depend if they are outliers or not.

The ordinary or simple residuals (observed - predicted values) are the most commonly used measures for detecting outliers.

Standardized Residuals are the residuals divided by the estimates of their standard errors. They have mean 0 and standard deviation 1. Unusual observations typically have large residuals but not necessarily so-high leverage observations can have small residuals because they pull the line towards them:

However, The numerator and denominator are not independent in the standardized residual. Thus, \(E_{i}^{'}\) does not follow a t-distribution: If \(|E_{i}|\) is large, the standard error is also large:

If we refit the model deleting the \(i_{th}\) observation we obtain an estimate of the standard deviation of the residuals \(S_{E(-1)}\) (standard error of the regression) that is based on the n-1 observations. Then the studentized residuals \(E_{i}^{*'}\) is calculated. It has an independent numerator and denominator: \[E_{i}^{*}=\frac{E_{i}}{S_{E(-i)}\sqrt{1-h_{i}}}\] Studentized residuals follow a t-distribution with \(n−k−2\) degrees of freedom. This method is suitable when there are several cases that might be outliers.

Now lets look at the leverage’s to identify observations that will have potential great influence on regression coefficient estimates. Generally, a point with leverage greater than \(\frac{2k+2}{n}\) should be carefully examined, where \(k\) is the number of predictors (IV) and \(n\) is the number of observations.

Since the furthest outlier are going to be selected, it is not legitimate to use a simple t-test. We would expect that \(5%\) of the studentized residuals would be beyond \(t_{.025}\pm2\) by chance alone. In order to fix this, we can make a Bonferroni adjustment to the p-value. The Bonferroni p-value for the largest outlier is: \(p=2np\)where \(p\)is the unadjusted p-value from a t-test with n-k-2 degrees of freedom. A special t-table is needed if you do this calculation manually, but this is done for you automatically, using the outlierTest function in the {car} package.

As you can see the studentized residual and its Bonferroni’s P-value, state-Nevada could be the potential outliers.

In {car} package, there isn’t a single-alone function to plot studentized residual, but through function-influencePlot and influenceIndexPlot, you can incorporate all information from outlier, high-leverage, and influential observations into a single informative plot.

In this diagnostic plots, you can find 4 different plots:

The id.n keyword indicates how many the most unusual observations are identified.

DFBeta and DFBetas are a direct measure of the influence of an observation on regression parameter estimates. Remember that an influential observation is one that combines discrepancy with leverage. so, DFBeta examines how regression coefficients change if outliers are omitted from the model. \(D_{ij}\) is often termed $DFBeta_{ij}$ as: \[D_{ij} = b_{j} - b_{j(-1)}\] where \(b_{j}\) are for all the data and the \(b_{j(-1)}\) are with the \(i_{th}\) observation removed. These differences are usually scaled by (omitted) estimates of the standard error of \(b_{j}\):

The R function dfbetas from {stats} package is used to calculate DFBetas value.

Then, you can identify the influential point above the cut-off line.

The robust distance is defined as

One classical method to identify leverage points is inspects the use of the Mahalanobis distances \(MD_{i}\) to find outliers \(x_{i}\):

Cook's distance for the \(i_{th}\) observation is based on the differences between the predicted responses from the model constructed from all of the data and the predicted responses from the model constructed by setting the \(i_{th}\) observation aside. For each observation, the sum of squared residuals is divided by \((p+1)\) times the Residual Mean Square from the full model. Some analysts suggest investigating observations for which Cook's distance is greater than 0.5 (\(>0.5\)).

Cook’s Distance can be easily calculated by cooks.distance function from {stats} package. You can also directly through plot function, as long as you specify the cook.levels.

Cook’s distance, leverages, and Mahalanobis distance can be effective for finding influential cases when a single outlier exist, but can fail if there are two or more outliers.

Nevertheless, these numerical diagnostics combined with plots such as residuals versus fitted values and fitted values versus the response are probably the most effective techniques for detecting cases that affect the fitted values when the multiple linear regression model is a good approximation for the bulk of the data.

We are going to use the same data example and linear regression model (fit1) for the Cook’s distance plot.

The function influencePlot() from {car} package, is a very handy function to represent these unusual observation issues. This function creates a bubble plot of Studentized residuals versus hat values, with the areas of the circles representing the observations proportional to the value Cook’s distance.

Note: Some of the contents are originally from Dagmar Blatná’s and William G. Jacoby tutorials. If you are interested in, you can find both online tutorials below. 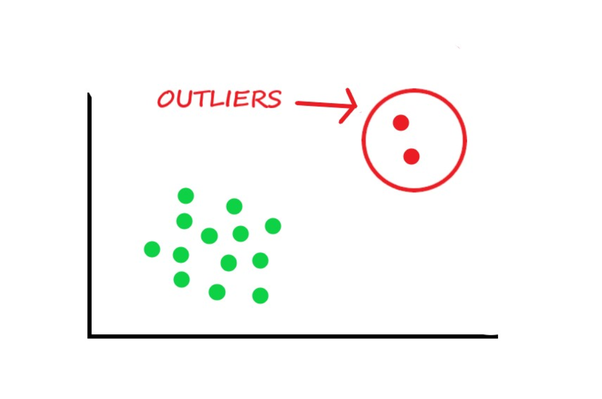 A series blogs for outlier detection!

Check out the _index.md file in the /blog/outlier-series folder to edit this content.